Today we slept in just a little, and left Portland about 9:15 to head to the coast. The weather in Portland was already starting to get warm; the high for today was mid 90s.  It took about 1 hour and 45 minutes to drive to the beach.  Our late start allowed us to miss all the rush hour traffic.  We drove through fields of berry bushes, vineyards, and trees.  Then through small mountains of state parks full of beautiful huge trees.  The town we went to was Seaside, Oregon.  The weather was very cool, with quite a breeze.  The sky was bright, yet everything was immersed in a soft fog.  It was a small, cute town with many small interesting shops.  We stopped for lattes, and then each got a donut down the street .  I had a buttermilk donut with glaze; I think it was the best donut I ever had.  It was dense, and had a fairly fine crumb, sweet with just a bit of tang from the buttermilk.  A perfect amount of moisture, with the glaze just barely puddling in the center of the ultimate oblong sweet treat.
We stopped at bookstore, a vintage clothing shop, souveneir shops, an antique store, a shoe store, an art gallery, and rock shop.  I bought a few old books from an antique store where it was 'make an offer' day; then I bought some petrified wood from the rock shop, where the owner also gave us a few sand dollars. 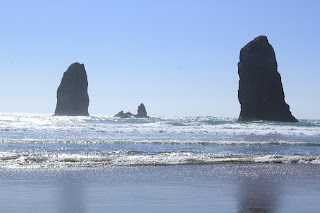 The ocean front was just a few blocks away.  We arrived about 1.  The sun was trying very hard to peak out, and chase the fog away.  When we first got there the tide was low, and sand dollars abounded.  None were completely unbroken, but some were close!  I enjoyed collecting a few of the nicer ones.  We also saw some very interesting sea creature which was completely clear, and about a inch thick, varying dimensions.  It felt firm but jiggly.  I thought perhaps they were jelly fish, but I am not sure.  I didn't step on any just in case, though I just had to poke a few with my finger to see how they felt.
The fog slowly lifted, rolling away bit by bit as the waves crashed slowly higher onto the sandy shore.  The breeze was strong, and the water fairly cool.  Seeing the ocean is one of the most amazing sights in the world.  I am always amazed at its beauty; the waves are so strong and loud, yet peaceful and calming at the same time.  I always feel the magnificence of our awsome God.  He has created such a beautiful world for us to enjoy.
After we left the beach we ate dinner at a local restaurant called Pig 'N Pancake.  That wrapped up our visit to Seaside, and we headed about 10 minutes south down the coast to Cannon beach to see Haystack rock.  That was a stunning sight.  It was getting cooler, and very windy, so we didn't stay to long.  We headed back about  5:30 which was perfect for missing the end-of-work rush hour near Portland as well.  The beach is one of my favorite places in the entire world.  If I ever left Wisconsin (which I love the most of anywhere) I would for sure want to live near the coast.  The smells of saltwater and sea creatures, the seashells and sand, waves crashing on the beach-what a lovely place the ocean creates.
As we drove home, we stopped for gas.  The station stopped at was apparently not self serve because as soon as I drove up, an attendant was at my window asking me 'What would you like?'.  I asked him if he was going to put it in the car for me, and after a split seconf of confusion remember my Grandmom telling me stories of how someone always used to pump your gas for you.  I can see how that would be a nice service, but it was a first time experience for me! 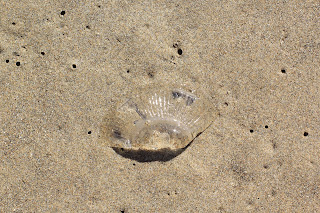 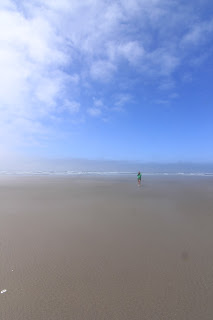 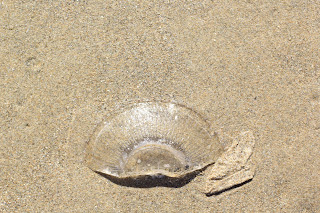 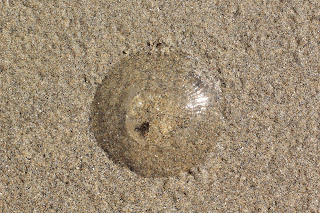 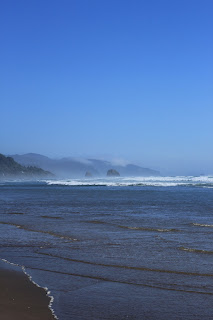 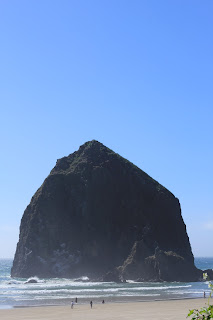 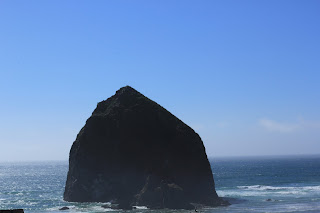 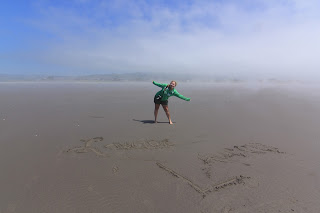 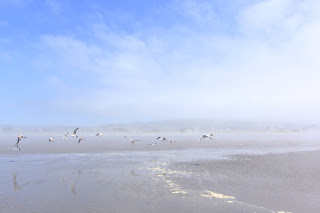 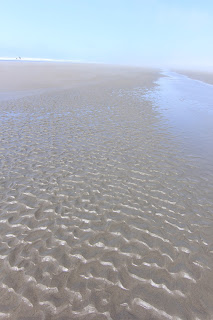 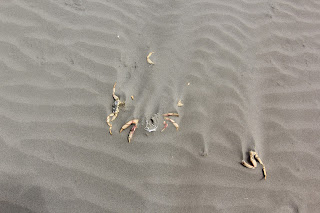 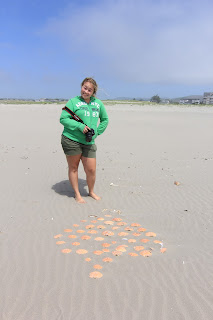 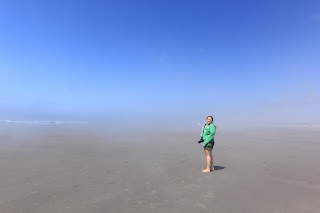 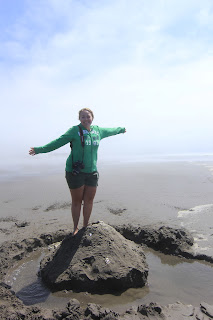 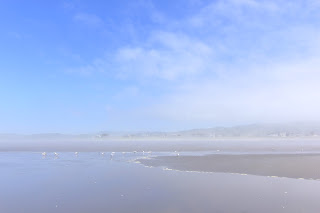 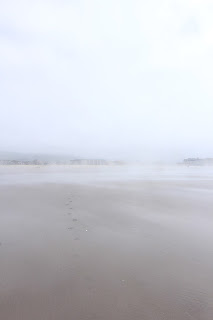 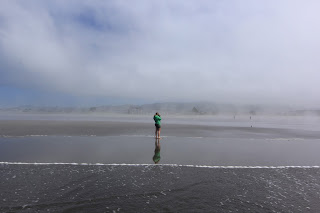 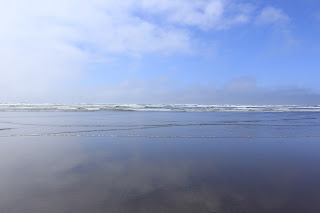 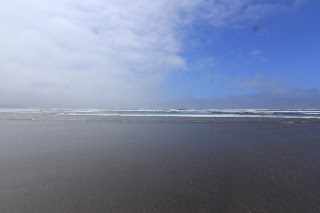 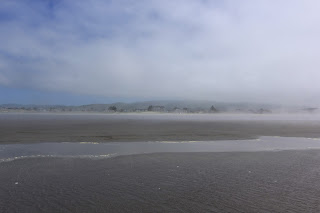 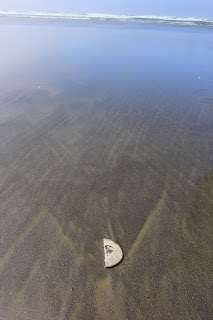 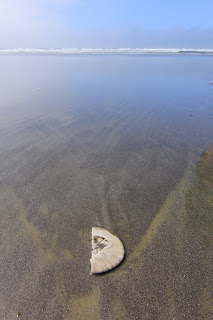 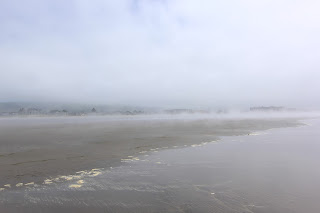 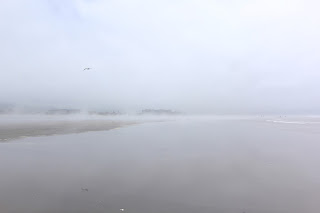 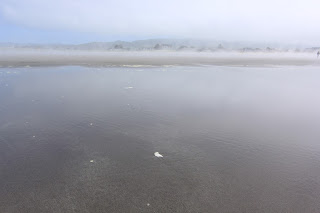 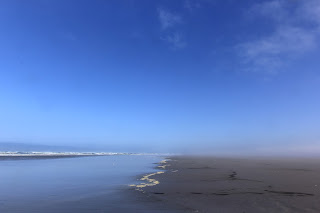 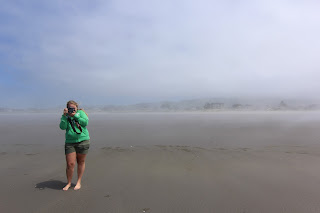 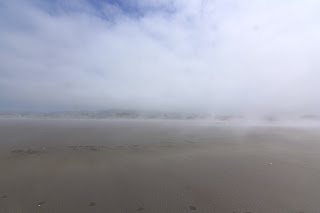 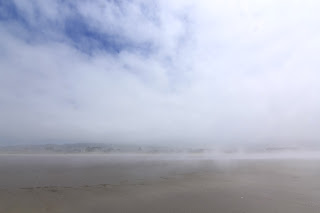