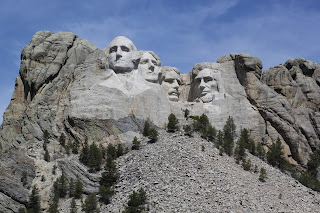 Today we woke up very near to Mt. Rushmore. After getting ready, eating breakfast, and packing the car again, we quickly stopped for Starbucks, then drove right to the Mt. Rushmore Memorial.
This was in small mountains (I think larger than foothills, but not terrible large at all.)  It is quite exciting to drive in the mountains. I love the ups and downs, ups and downs, again and again.  We saw so many beautiful sights hard to describe.
First we saw the large rocks (such as the ones the presidents are carved into.)  Each one looked a little different.  (To me they mostly looked like sleeping rock monsters.)  Some are very large, and others very small.  Pine trees abound. Some regular trees are around also.  Mt. Rushmore was different than I expected in the fact it had a parking garage, and lot, and it was very...built.  There was a long brick walkway with many brick arches along it leading to an amitheatre.  The presidents over looked this ampitheatre and walkway.
Seeing the carvings was so amazing. They are extremely detailed, and of course, ginormous!
We took lots of photos, and also sat and looked for awhile.  The faces are at the top of a huge rock formation; directly under them is quite a bit of loose rocks and gravel with just a few trees, under that was lots of trees along a steep hillside.
After we finished seeing Mt. Rushmore we  went a little further.  We stopped and looked at different places several times.  Eventually we stopped for the night in an old mining town (or perhaps I should say a set of old mining towns, as there are several very close together.)  Mountain towns are just so different than what we are used to seeing. This one is old, has just a few streets, some high, some low, some steep.  The roads are narrow in some spots, the houses all have retaining walls to keep their yards intact.  There are lots of brick buildings, but the houses are mostly very colorful. 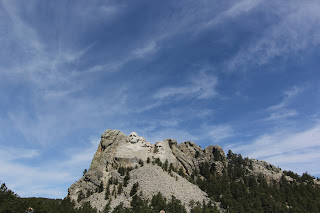 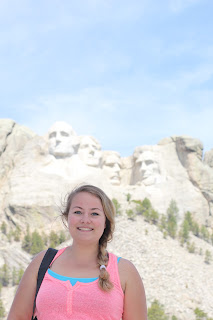 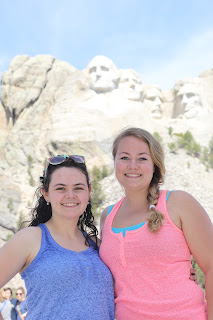 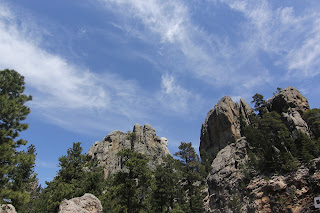 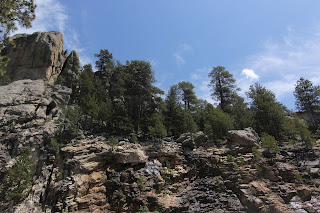 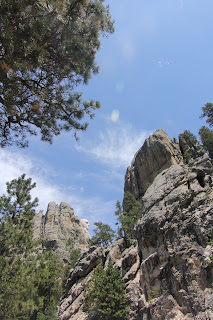 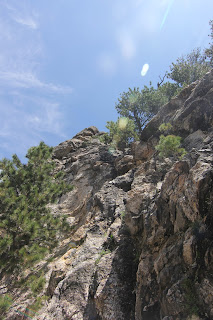 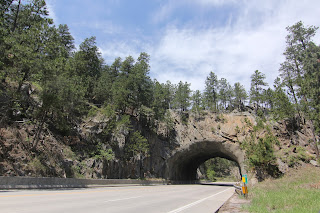